You are here: Home>Events>World Cup, Championship & Tournament>1963 The England team 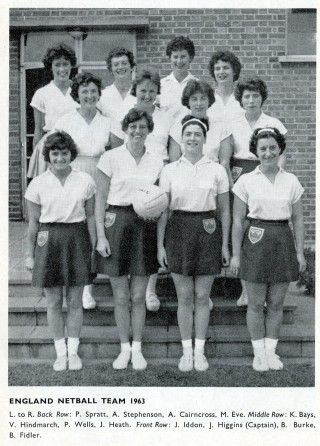 Sue Auton commented : My Auntie, Ellen Marsh, my Mum, Mollie’s, older sister!! Great memories of watching England Netball at Wembley Pool in the 60s! Ellen was a formidable and amazing woman who did such a lot for World netball! I remember too her life long friend Elsie Sanders, also a big part in netball! A fantastic time, I feel so proud to have witnessed that era! 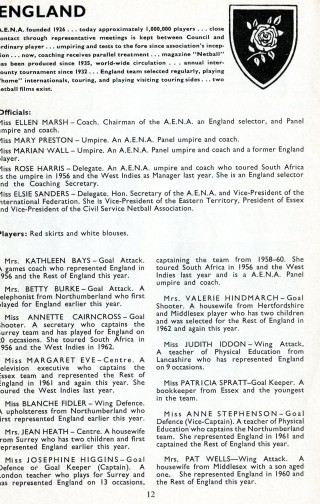 The recent flush of added interest in Netball brought back happy memories of players and officials I was fortunate enough to know in the 1950’s and 60’s. Mary Preston, coach and umpire, was my teacher and Deputy Head Mistress at Edmund Waller Primary School, South London, and encouraged my interest in Netball. A stern but very kind woman, she tried to discourage my bad behaviour through interest in the game. She remained in contact with me for many years, despite my falling out of love with Netball.

Her partner, Jo Higgins, inspirational England Captain, coach and umpire, was always encouraging and supportive. and willing to give tips and advice to up-and- coming players. She was a teacher at Kidbrooke County School and superbly coached her team there, winning many competitions.

They were very busy women, arranging school tournaments and escorting their proteges from one event to another. All this in addition to their responsibilities to the county and national teams they so ably represented.

Fay Smith, England team to South Africa 1956, was my sports teacher at Greenwich Park Secondary School, South London, in the 1960’s. She was a small woman, even for a player of her time, probably about 5′ 5″, let alone the Amazons who grace our courts these days. She was like a jack in the box, achieving amazing height to win the ball from much taller opponents.

Fay managed to persuade my father to allow me to go to the Netball World Cup in Eastbourn in 1963, at the tender age of 16. in the hope that it would encourage my talent at the game. Alas it did not. She arranged everything: a B&B for me, transport to the tournament and kept an eye on me. It was a wonderful time and a fascinating insight into a wider world for a working class girl For many years we remained in touch. I visited her from time to time when she married her husband, Eric White, and went to live in South Moulton in Devon. I remember she used to pick me up at Penzance Station in her Mini and liked to drive, literally cross-legged, to her home to add interest to her journey!

It was lovely to read their names on your website and to feel their resonance in the words of others who knew them. These were all woman who gave generously of their time, and were committed wholeheartedly to the game, and to encouraging other people. There is no doubt that they had a very great influence on my outlook and attitude in future life. I have always been very thankful to have known them and for their help and support.

You can find out more about all the players and which teams they played for by viewing the team information image.

This is the first time I have seen this page or learned of the death of Betty Burke, who was great fun and a talented Player. I always met her at the Inter Counties and later we met at a County League Match and always had a good natter.
My thoughts go to her Family with sympathies for their sad loss.
Regarding 1963 – what an experience. I could write reams about kit, practice, training, colleagues and opponents but it would be too lengthy. However it would be great to catch up with any survivors of that Squad – the first to play in a World Tournament.
Incidentally my Christian name is Pat and not Jean and my Surname is now Harris (formerly Wells).

My auntie was Jo Higgins. Unfortunately she died quite a few years back. I always remember the family taking about the brilliant team captained by her, but was s bit young to understand the significance of it.
However, she was also a great teacher and taught me logarithms in about 10 mins flat.
I also remember her whizzing around in her 3-wheeled bubble car back in the late 60s!

Josie Higgins was my god mother having played netball and been at school with my mum. She lived with Mary Preston until her death and they were both teachers.     Jennifer Hirst