You are here: Home>Netball in England>Club>1933 All England Women's Net Ball Association 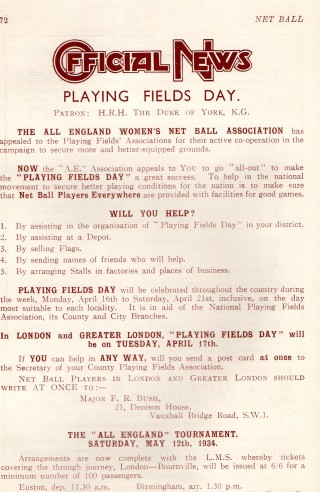 The “A.E.” Association joined forces with the Playing Fields Association  in a campaign to secure more and better equipped grounds and organised a tournament in Bournville, Birmingham, by kind permission of Messrs. Cadbury Bros..

Arrangements were made for a train journey from London Euston to Birmingham New Street return at 6s.6d. return and a special train was organised from Birmingham to Bournville providing a minimum number of 100 passengers could be guaranteed.  Net Ballers were urged to send a post card to County Secretaries to take advantage of the offer!