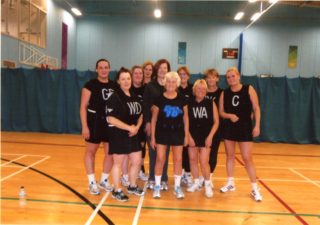 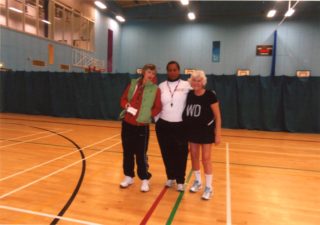 Joy with her umpires, Janet and Linda.

I received a really interesting letter from Joy Staples about her netball history and she has very kindly given me permission to share the content.

Joy has been playing Netball since she was 9 years old and is now 74. Her husband said that she ‘always put netball first’, which Joy says she thought was true although she would not admit to it! At Primary school Joy learnt the various skills she needed to play her ‘beloved sport’ and carried on playing at Secondary School, where she was lucky enough to have Joyce Wheeler as her P.E. Teacher, who she still keeps in touch with. After leaving school Joy was not able to play netball because of work until she joined one company who had ‘home’ and ‘away’ matches.

After having one child Joy founded the White Oak League in Swanley, which she ran this until she was thirty when she ‘de-camped’ to Singapore. There she set to ‘building’ another league with two teams of her own in the Singapore league and later was appointed to the Committee. Joy took her first umpire test out of four in Singapore, passed with flying colours and took the current test three years ago in England.

Later on, Joy with another netballer set up a new league at Dartford indoors. She still plays, umpires and coaches in the Beckets league in Dartford. Although she has given up coaching Primary schools (being a level one coach), she still coaches adults.

Four years ago Joy started another league indoors for anyone who wanted to play netball i.e. players who do not like playing outside. The league is based at Dartford N. K. C. where Netball all started when Madame Österberg started teaching the sport. Joy’s league is flourishing with 14 teams on it.

Joy says that: ‘There is no way I am stopping playing yet. My 2 new knees are fantastic, the only problem is I’m always getting stopped and beeped at airports!’

It’s great to hear Joy’s enthusiasm for the game and hope this will inspire others to share their netball histories via this website. (go to the ‘get involved’ section on this website to share yours).

I had the privilege of playing netball with Joy in Singapore. It was a great experience. Her enthusiasm for the game was boundless. I am not surprised to read that Joy is still involved in the game.    Long may her commitment last!      Daphne Smith

Delighted to come across this story. I played netball with Joy inSingapore. I am currently in England.    Jenny Moon