You are here: Home>New contributions>Netball Rules 1947- Today's 'toss up' was 'the bounce' 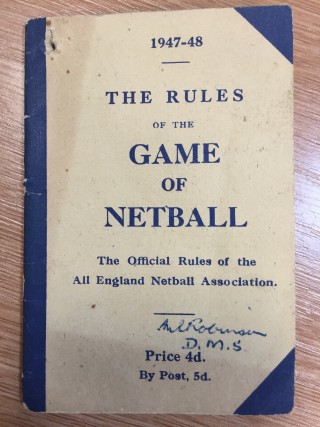 The Heritage Team became in possession of an All England Netball Association official rule book from 1947 when Val Bentley generously donated the book to our heritage research and to keep as part of the archives.

The rule book is a lot smaller and thinner than the rule book these days, however many of the rules are still the same.

One rule I have notice however, has changed significantly. It is what we call today the ‘toss up’. This happened when two players from the opposite team simultaneously contacted each other or went offside to decide who has possession of the ball.

Today the two players will stand 3 feet away from each other with their hands by their sides whilst facing the way they are shooting. When the umpire throws the ball up halfway between them, both players will fight for possession of the ball.

This rule was entirely different back in the 1940’s. Today’s ‘toss up’ was called ‘the bounce’.

‘The bounce’ was used for the same reasons as today, either a simultaneous offside or contact.

Below is the extract taken from the 1947 rule book to explain ‘the bounce’:

‘The two players between whom the ball is to be bounced shall stand 9 feet apart, facing each other, backs to the sidelines, and left sides towards the goals which they are attacking. The Umpire shall stand squarely facing the goal line not more than 9 feet from the two players, and shall bounce the ball so that it rebounds equidistant from them. They must stand erect, feet together and arms by their sides until the ball touches the ground. The ball shall not be in play until it has been touched (not necessarily caught) by one of the two players between whom it is bounced. Umpires may vary the strength of the bounce’