You are here: Home>People>England Umpires & Officials>1935 - A day in the life of an All England Examiner 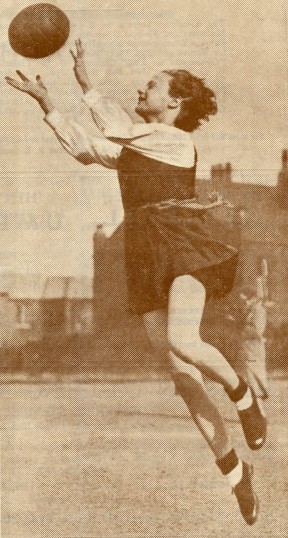 A player from the cover of a 1935 Net Ball magazine 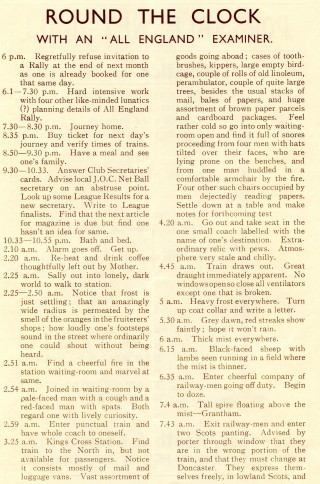 The first part of the examiner's day

Arriving at the rally and home again!

These days, travelling around the country to watch, umpire or play in a match is relatively quick and easy. Pity then the poor examiners of the 1930s, one of whom wrote about a typical day as an examiner in the Net Ball magazine. You can read the full text by expanding the images on this page.

Her ’round the clock’ account starts at 6pm with a meeting as she put it, with ‘four other like minded lunatics‘ planning the All England Rally. The meeting took an hour and a half, after which she took an hour to get home, going via the railway station to buy a ticket for the following morning. After a quick meal, she answered a variety of netball related mail and finally got to bed at 10.55pm.

This was very closely followed by her alarm, which went off at 2.10am! She then had a 25 minute walk to the station to catch her first train to Kings Cross at 2.59am, which arrived there at 3.25am. After an hours wait in variously occupied waiting rooms, she caught a train which finally arrived at her (undisclosed) destination at 9.45am.

The rally was in full swing when she arrived at the ground at 10.40. The rally lasted till 3.30, all the while she was ‘immersed in work’, but found the ‘surrounding enthusiasm inspiring‘. she gets a lift to the station and decides to pay extra to go on a Pullman express, which is 3 hours quicker than the ordinary train. This gets her back to Kings Cross at 7.15pm.

Her final entry reads; ‘Soon be home now. Bed will be very welcome!‘

The whole article is written lightly, with lots of description of the scenery and the people she comes across, but the overall impression is of a long hard days work. Is it still this difficult?