You are here: Home>Topics>England Netball Magazine>A new type of trophy

A new type of trophy 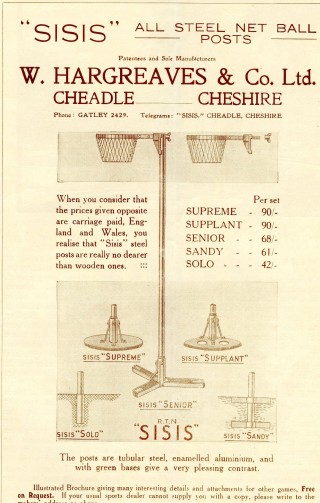 What sort of trophy would you like to win?

In 1934, a schoolteacher wrote about the dilemma of providing a netball trophy for an inter-form netball tournament which wasn’t the traditional cup or shield. She came up with the idea of a netball goal post. She obtained this from the manufacturers of real posts, Hargreaves, and it was, as she said, perfect in every detail. The models, with ‘green bases,  steel coloured posts, green rings and realistic nets, can be obtained for the small and rather ridiculous price of ten shillings’ (50p).

The anonymous writer goes on to say: ‘ I have one of these standing on my desk at the moment. it stands about 2 feet high , takes to pieces like real Net Ball posts and is, I think, the ideal thing for an inter-form or inter-league trophy.’  As she concludes, ‘Anyone can have a cup or a shield – but only  Net Ball players can have a goal post.’