You are here: Home>Topics>Equipment>On the ball!

An advertisement for Webbers netballs from Netball Magazine 1937

An advertisement for the Wisden net ball 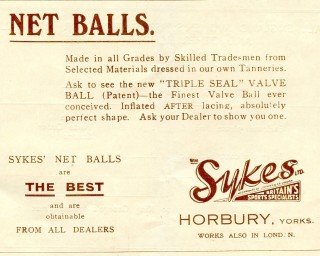 An advertisement for netballs by Sykes of Horbury in Yorkshire 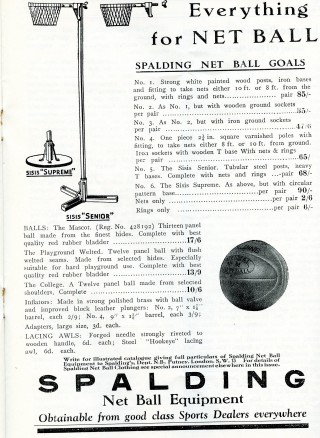 You can’t play netball without a ball! Just as now, early netball magazines often carried advertisements for netballs. The merits of the various different makes of ball were often discussed in the magazine.

The early balls were made of leather with a valve inside to keep them inflated. One surprising manufacturer was Wisden, of cricketing fame. John Wisden built up his business interests in cricket equipment manufacture while he was still playing cricket, setting up his own company, J Wisden & Co, in 1850. After he retired in 1863, he expanded his interests into other sports and became a major supplier  and manufacturer of a wide range of sports equipment. After his death in 1884, the company continued to expand and in 1911 was awarded the Royal Warrant as ‘Athletic Outfitters to the King’. Although the company exhibited at the British industries Trade Fair in 1929 and again in 1947, it had gone into receivership in 1939 and went through a number of hands before being bought by Grays of Cambridge.

The Blue Ring balls made by Webber Bros of South Norwood  were often praised in the magazine. You can see how their equally popular footballs were made in the video clip on this page. The process for making netballs would have been the same.