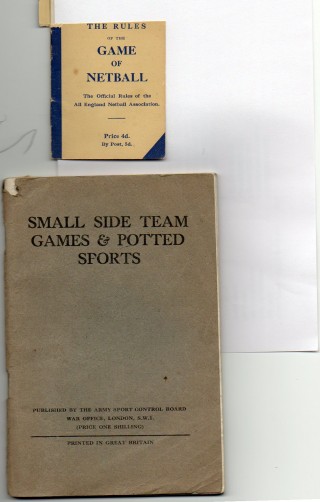 Kent Netball held its 85th birthday celebrations in September 2015 and were joined by many Life Members, one of whom, Jan Bracey (ESNA and Kent Schools) gave an absolute gem for the Kent Archives – namely a Rule Book published by the All England Netball Association – date unknown, and printed by Diemer & Reynolds, Ltd., Bedford.

The Rule Book was tucked inside another book, which she found in a junk shop – “Small Side Team Games & Potted Sports”.   Published by The Army Sport Control Board, War Office, London SW1.  (price one shilling).   This book, date unknown, but is pre 1948 Olympic Games, as there is a reference to “Service athletes are already training for the Wembley Olympic Games of 1948”

This book lists numerous games (A) Games for 10 or more players.  (B) Games for fewer than 10 players.  (C) Minor Recreational Games.

The section relating to Netball, spelt Net Ball, contains the, but concludes with this interesting statement :

Net Ball Clubs may play nine or five a side, and the ground may then be correspondingly larger or smaller, but should never exceed 150 feet by 75 feet; in any case the size of the shooting circles and centre line must not be altered.  With a team of nine players, a Right Attack (near the Goal Shooters) and a Left Defence (near the Goal Keeper) could be added to each side, and each player would remain in her own court; with a team of five players, the Attacking and Defending Centres could be omitted.

I have typed out the Rules so that these can be shared with those interested in the history of our game.